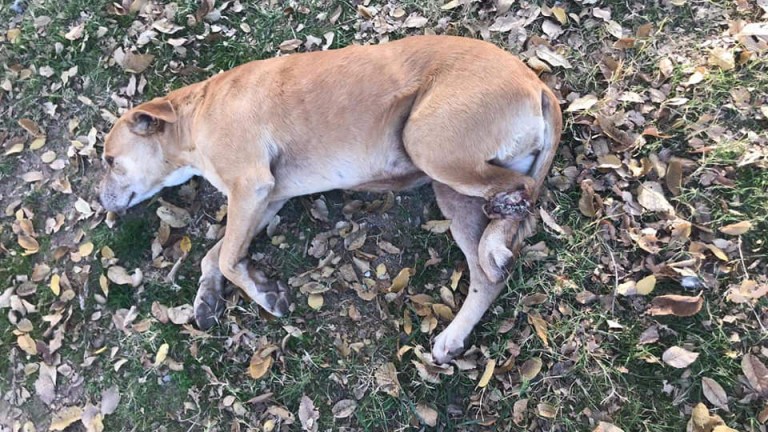 This is a photo that someone took of Kinley lying on the forest floor with a horribly infected leg injury. The person who took this picture walked away and left her there, but posted her picture on an Oklahoma rescue group – asking for a local rescue group to go save this dog. She was described as very sweet, with a wound so putrid that you could smell her before you could see her.

8 HOURS LATER Krissy was tagged in that Facebook post. 8 HOURS LATER not one rescue group had stood up to help this dog! So of course, at 10:30 at night, Krissy had a volunteer team out in those woods looking for her. She knew that injury was from a bear trap, and that the dog’s leg was crushed. If it was putrid, infection was ravaging her body and every wild animal within several miles would be able to smell it. She knew that the dog she named, “Kinley” would not survive the night out there. 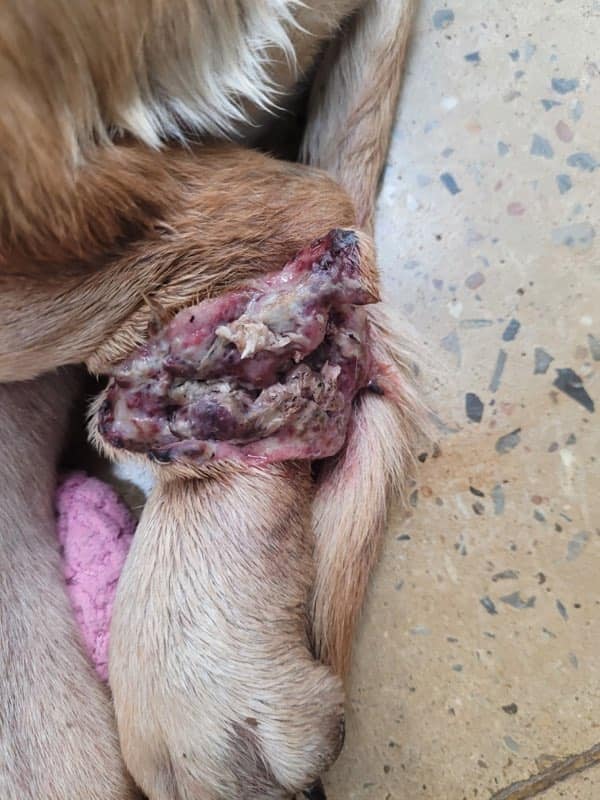 After what seemed like forever, the rescue team found Kinley and gently loaded her into the car. Krissy asked for them to get her temperature because she knew – the infection was bad, and it was. Kinley’s fever was over 104 degrees. We had Kinley (which is Scottish for Warrior) rushed to the nearest emergency hospital where she was evaluated and had the gamut of tests run. Xrays would show that the bone was indeed crushed, amputation would be required. BUT… Kinley also had shotgun pellets throughout her body, and in particular in her right front hock. Doctors weren’t sure if they amputated her left rear leg, if her remaining legs would be able to support her. 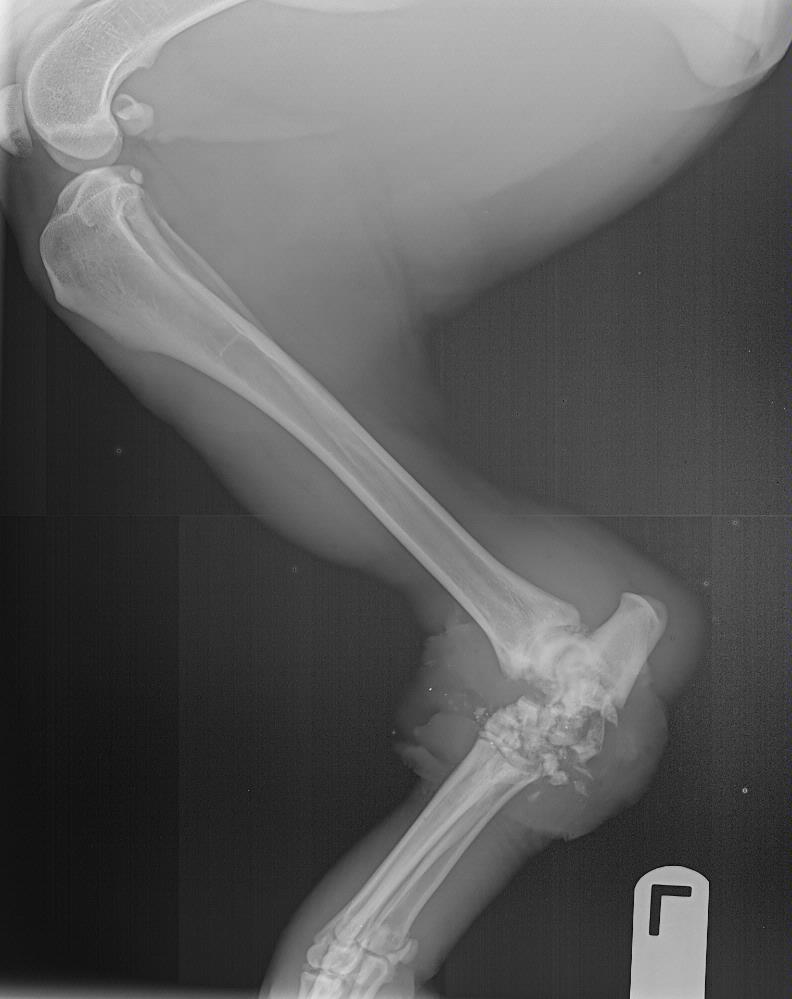 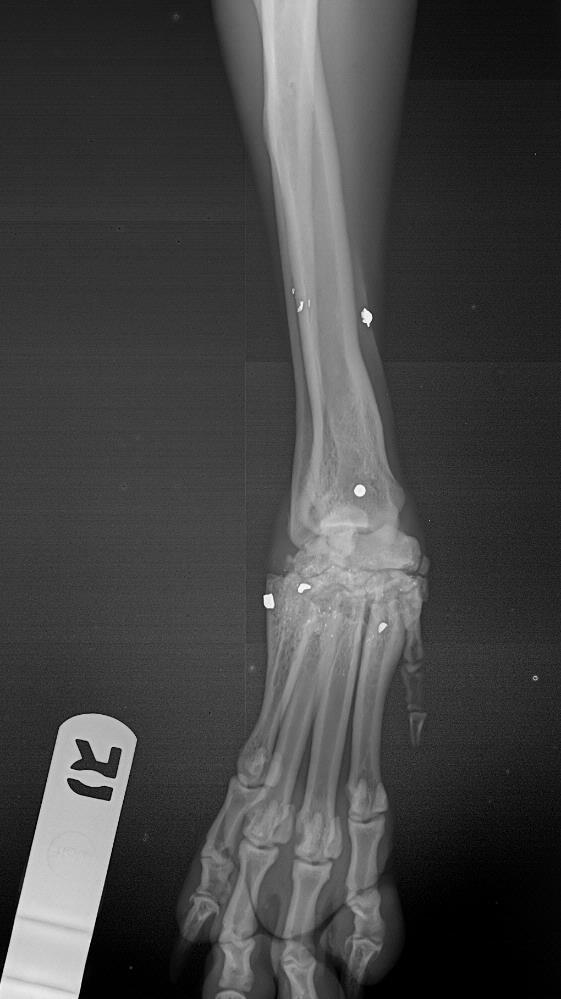 Kinley had a whole host of issues. Her blood work showed her to be anemic, she had a tickborn disease, she was covered in fleas and ticks,and it appeared that her teeth had been ground down to almost nothing on top of everything else. It would be unsafe for her to undergo surgery at this time. She would have to be moved to another hospital in the morning where she would be hospitalized for 5 days on IV antibiotics and pain meds to get the infection under control before they could amputate the leg. 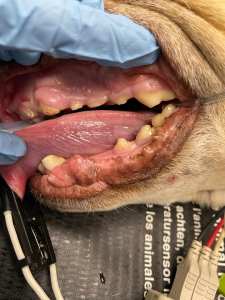 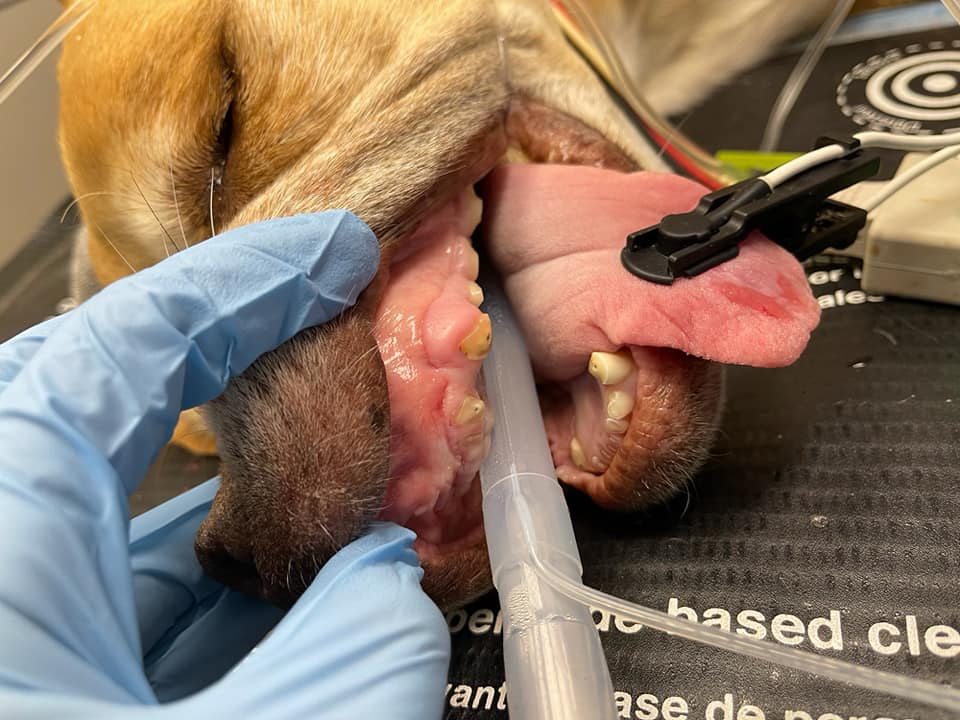 During her hospitalization, doctors worked with Kinley to assess whether her front leg could bear the weight after amputation. It was decided that she could, but she may need to wear a brace for the rest of her life. We went ahead with plan A – To save her life. Her story could not end this way. It just couldn’t! 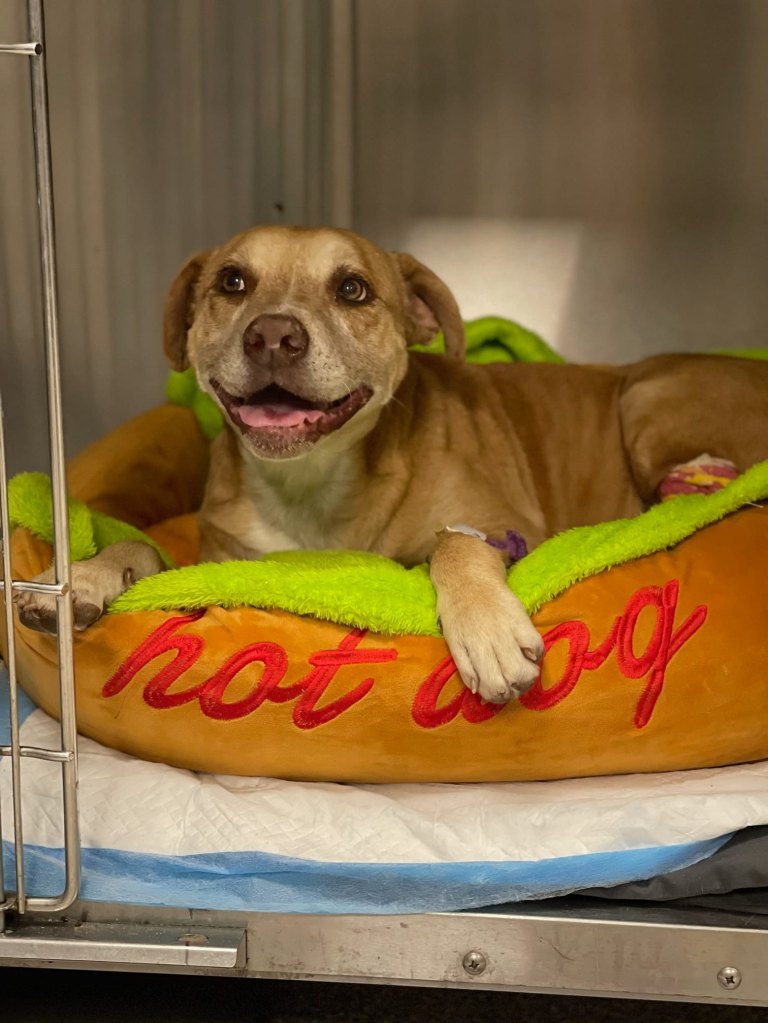 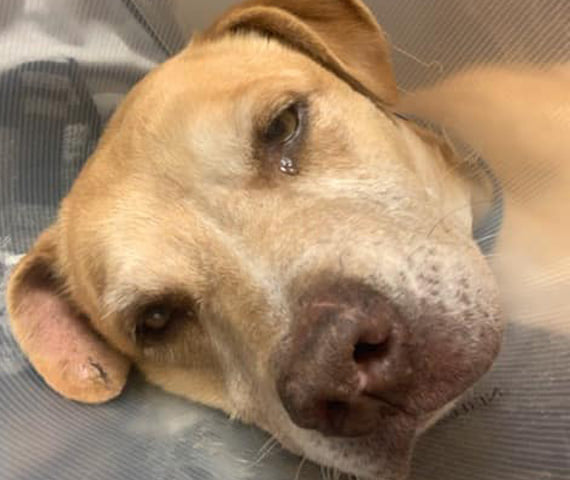 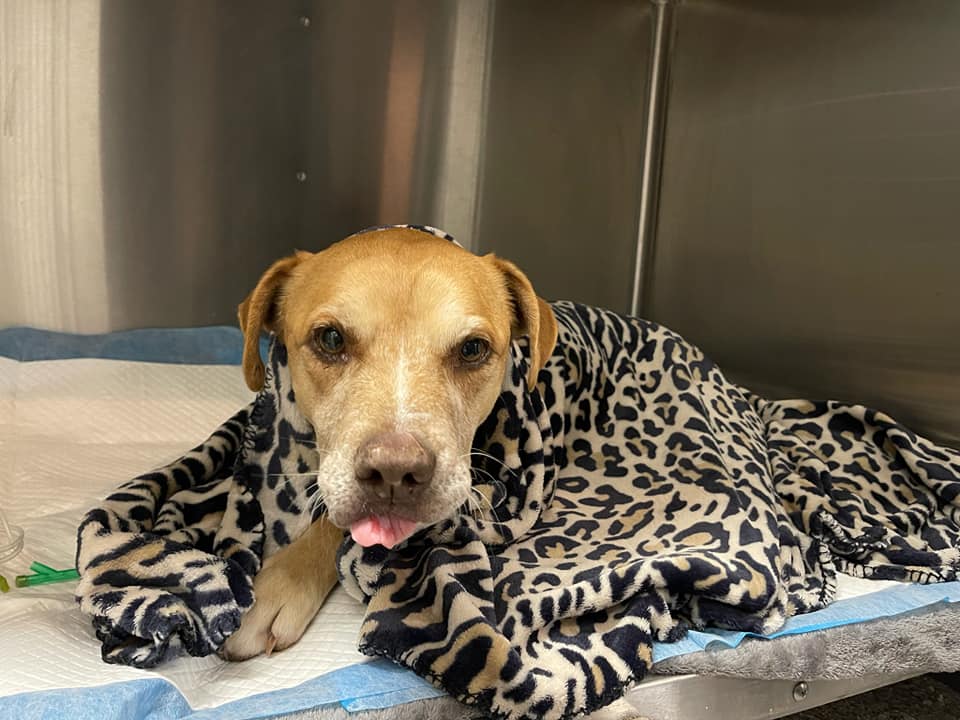 Kinley had all the creature comforts we could give her during her wait for surgery. She was mostly happy during this time, but she had some sad days. Finally her surgery was done, the painful leg was gone! Kinley was up and walking within a day. She stayed in OK for 2 weeks post-op for follow up visits with her doctor, but the MINUTE she was allowed to leave, our pilots flew out to OKC to pick her up and bring her… HOME ♥ 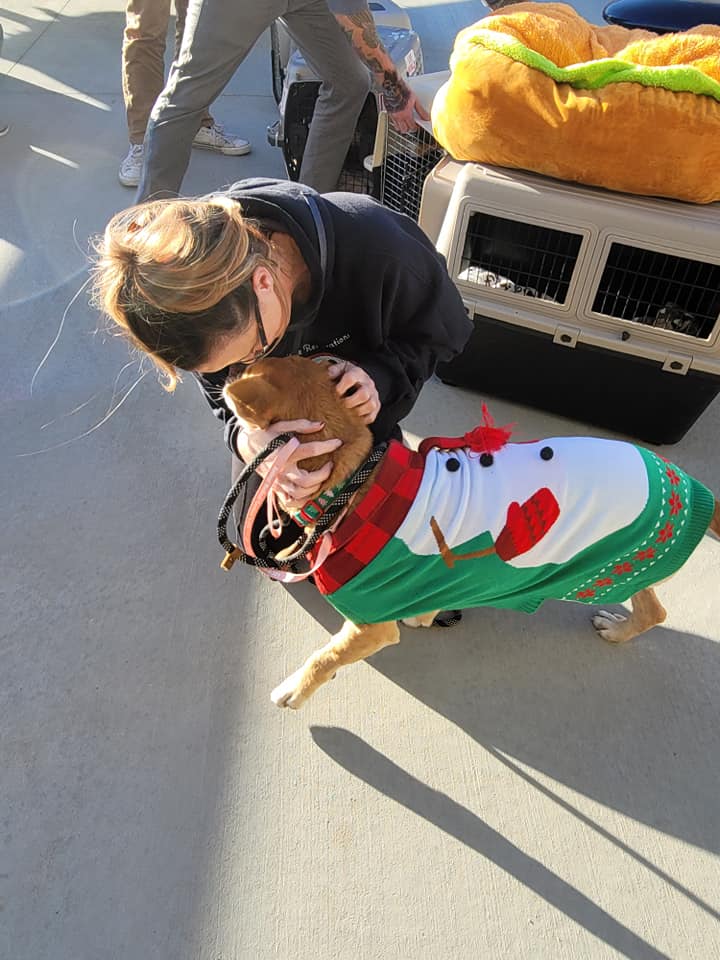 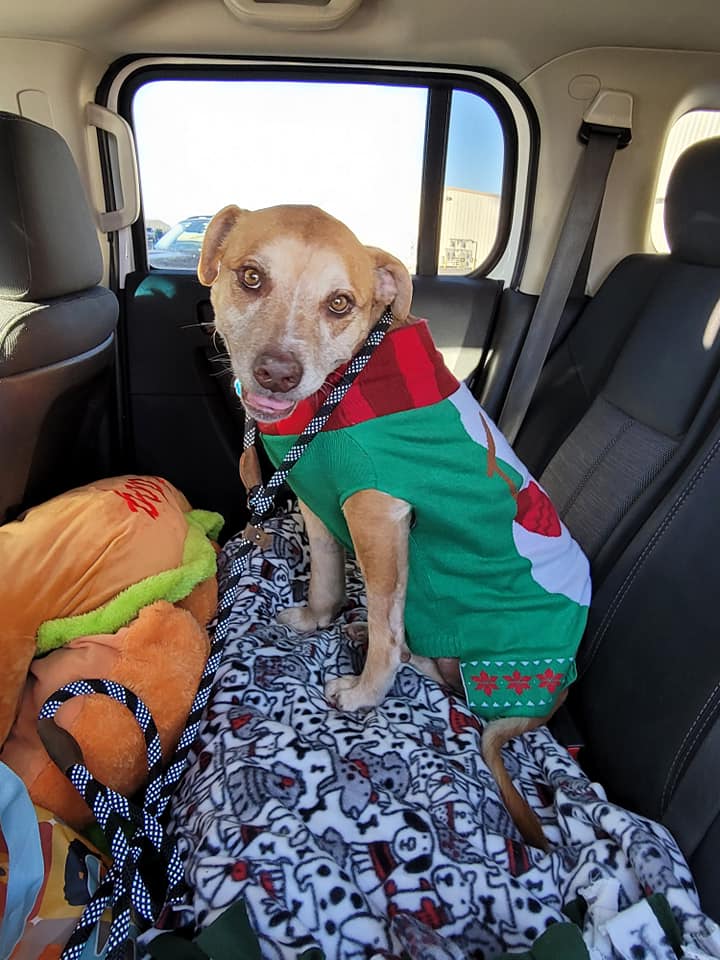 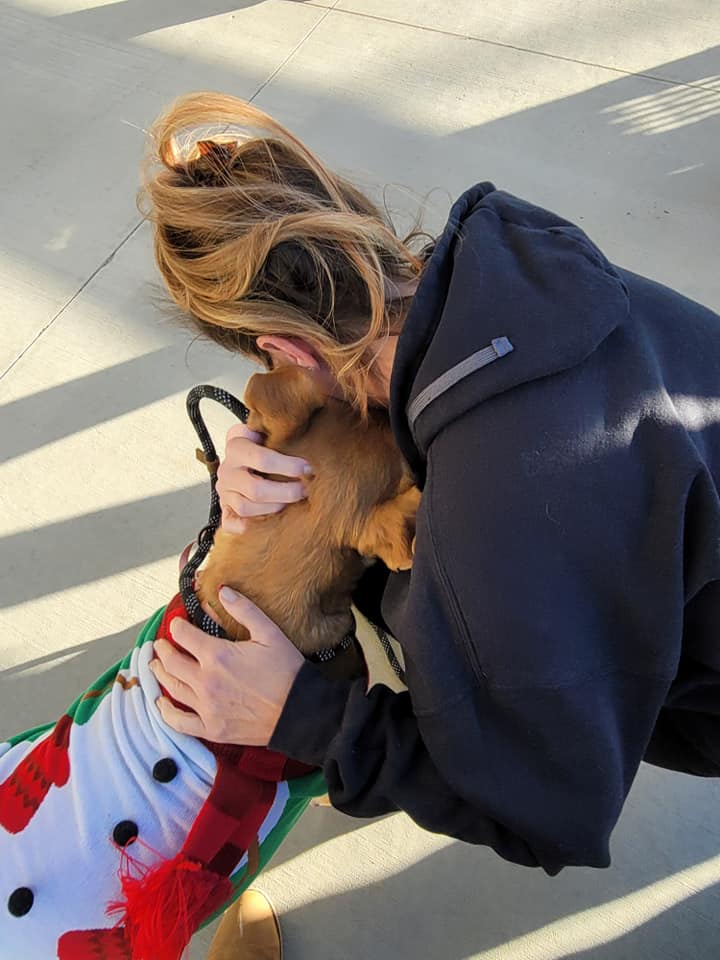 Kinley has since been adopted by her foster mom, who couldn’t let this sweet girl go. We are THRILLED that this girl survived all that she has, and will know nothing but love and kindness for the rest of her days. 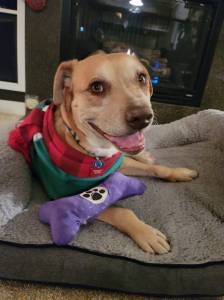 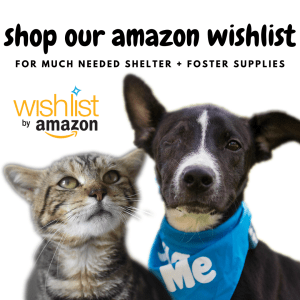 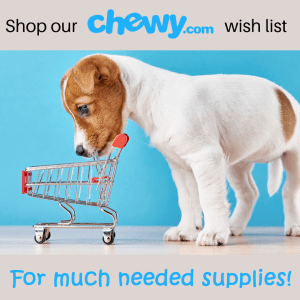